With Hyogo Prefecture to the east and Hiroshima Prefecture adjoining to the West, Okayama Prefecture is located at the centre of the ancient Sanyō Highway area. Facing the Seto Inland Sea and Shikoku to the south, and adjoining the San-in region to the north, since ancient times it has had an important location as a strategic transportation hub of the Chugoku and Shikoku regions.

With ancient Kibi rivaling the Yamato region as an origin of culture, the area has since olden times, through to the current day, made various large contributions to the promotion of industry, economy and culture.

Currently boasting an extremely well established transport infrastructure of a level rarely seen nation-wide and which includes such aspects as a highway network which extends across the length and breadth of the prefecture, the Okayama Airport 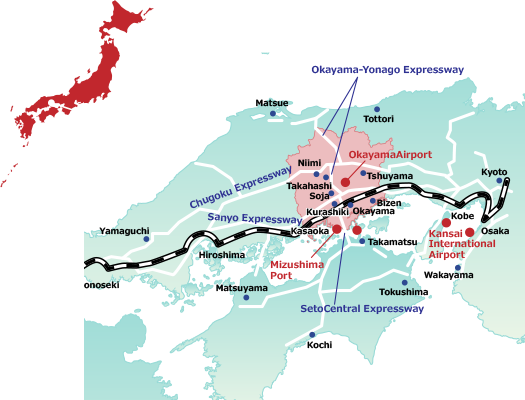 which operates flights both domestically and internationally, and a rail system which includes bullet trains and extends in all directions, the area is continuing to steadily develop as a transportation hub of the Chugoku and Shikoku regions.

Travelling 2 hours via the highway from Okayama interchange covers an area populated by some 16.4 million people, a population exceeding that of Tokyo.

Furthermore, in April of 2009, the capital of the prefecture, Okayama City, became the country’s 18th designated city.

The Prefecture at a Glance － Mountains, Rivers, and Sea － 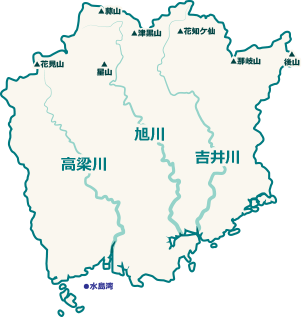 The Prefecture at a Glance － Mountains, Rivers, and Sea －

・Water - The three rivers which originate in the Chugoku mountains (the Yoshii, Asahi, and Takahashi rivers) are often praised for their rich and high quality waters, and are used for domestic, industrial, and agricultural applications.

Okayama Prefecture is the center of the Chugoku
and Shikoku districts, and the point from which roads spread to all four cardinal points.

Okayama Prefecture is located at the center of the Sanyo Expressway, which runs between the Kansai and Kyushu regions. The south side of Okayama is the gate to Shikoku, while its northern side offers access to the Sanin region. It receives attention as a key traffic hub and a place for sightseeing, as well as for being an industrial complex.

The airport Shuttle Bus is convenient for travel from Okayama Airport to each area of Okayama Prefecture.